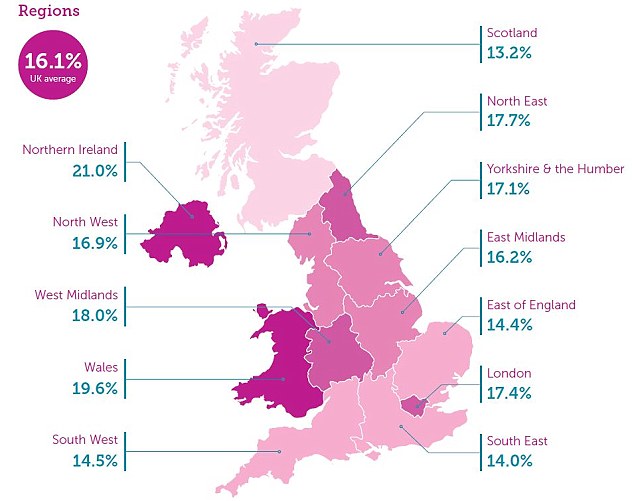 Despite being a relatively small nation in terms of size, there are incredible divisions across the UK that regularly sees different areas being placed into different categories. The debt map of Britain is no different, with certain regions of the country seeing far higher degrees of debt than others. A lot, inevitably, depends on the demographic of the area in question, and who exactly is living there. It is perhaps no surprise that areas where there are a high number of young people, larger families and people renting see higher figures, with these particular groups more vulnerable to the possibility of debt.

8.2 million People in the UK are considered ‘over-indebted’, a term coined to describe those who are struggling to keep on top of their borrowing. This equates to over 16% of the population, with the figure largely compiled of the groups mentioned above. The report, compiled by The Money Advice Service, continues to show some quite revealing statistics, an example of which being that when it comes to families, parents are 50% more likely to be in debt than adults without kids.

The highest levels of debt in terms of region were Northern Ireland (21.0%), Wales (19.6%) and the West Midlands (18.0%), with specifically the local authorities of Sandwell, Blaenau Gwent and Merthyr Tydfil the most indebted. The report studied the characteristics of around 16,000 people, with questions asked including:

If the answer was yes, then you were considered over-indebted, and parallels were drawn between this status and age, income and tenancy situation. The majority of councils listed were areas found in inner-cities, with the exception of rural Welsh and Northern Irish communities that placed highly too.

Other quite striking comparisons were that different renters faired differently too. It was found that you were far more likely to be over-indebted as a renter, though problem debt was 21% more likely with private landlords compared to 29% with social housing. Single parents too are likely to be more over-indebted, a problem considering that there are 3.8million single parent families in the UK. The chances of debt for single parents is 28%, compared to two-parent families at 18%.

It was also found that only one in five people who are suffering from debt problems look to get advice. One of the most crucial things in tackling debt is to remember that you don’t have to experience it alone. Many choose to withhold the burden from family and friends, which only exacerbates the problem. By talking to Enjay Debt Management you not only are doing something about the problem, you are also sharing and releasing the pressure of secrecy.

At Enjay Debt Management we work personally with those who are struggling to see a way out of the credit they owe. If you have found yourself in difficulties and need a guiding hand, please call Freephone 0800 612 7958 or email info@enjaydebtmanagement.com for more information.